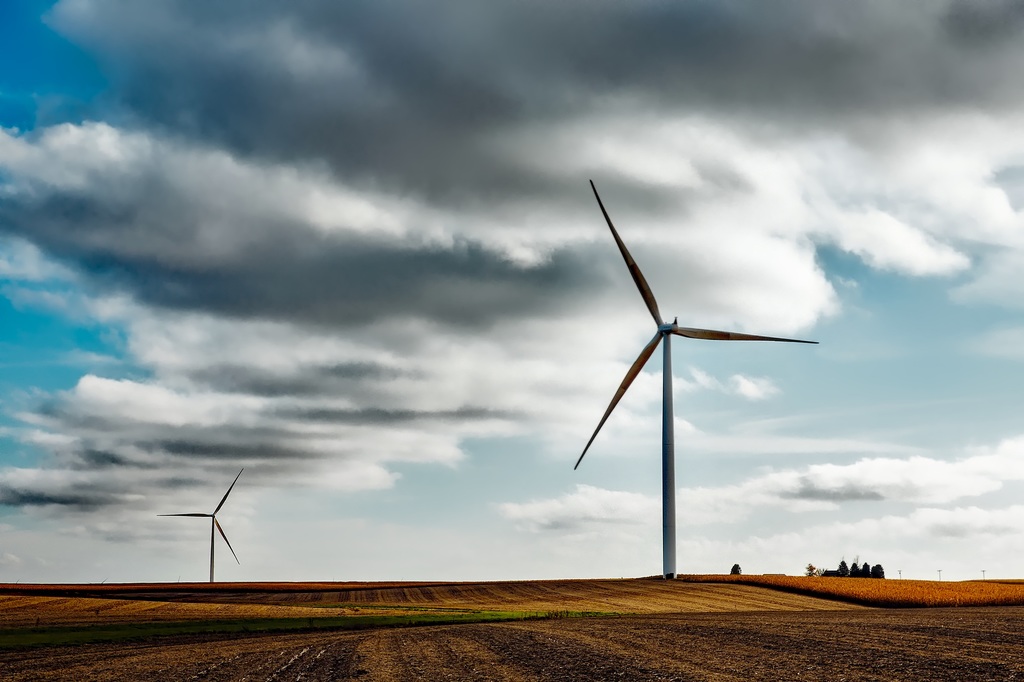 Wind turbines translate the wind in the atmosphere into electricity. Most turbines are fairly straightforward in their design: a tall supportive structure with 2-3 propellers on top. These vertical-axis turbines are what most people think about when they picture a wind turbine. Although far less common, there is also an “egg beater” style of turbine, also called a horizontal-axis turbine, properly named after its creator, the Darrieus turbine. Both types rely on wind energy to turn the propellers which are modeled after the wings of an aircraft. Too much or too little “pitch,” or slant, will result in propellers that do not turn efficiently.

The propellers on either kind of turbine work kind of like a fan set on reverse. Most modern designs are both “pushed” and “pulled” by the kinetic energy of the wind to generate the most energy possible. Most of these kinds of turbines are fitted with sensory equipment that turns the turbine to face the wind, maximizing the wind energy that is harnessed.

Of course, the wind isn’t constantly blowing, so wind-generated electricity must sometimes be stored in batteries. Wind energy has the distinct advantage of being available 24 hours a day, 7 days a week, unlike solar power, which is, obviously, only available during the day. It is common to see wind energy used in combination with some other energy source such as solar power or hydroelectricity to maximize the benefits of both.

The actual mechanics of how a wind turbine works is strikingly simple. When one turbine (or an entire farm of them) begins to turn, the energy created turns a series of shafts and gears that run the length of the tower. This turning energy is funneled through the head of the turbine to an induction generator – again, a reverse version of a normal generator – which has the job of turning the wind into electricity. The generator does this by sending the energy from the rotating shaft into a rotor that has oppositely charged magnets within. The flowing electrons of copper coils inside the generator create what we know as electricity.

This electricity is then directed into a power grid by large cables where it is collected and held until needed. Substations boost the turbines’ output so that more electricity can be created. The power grid enables power companies and operators to direct certain amounts of electricity to where it is required. At this point, wind energy is exactly like regular electricity. Power stations and fuse boxes must be implemented to regulate the voltage for normal homes and other establishments.

Turbines can be small enough to run a single home or business using air ducts, or they can be large enough to power up to 1400 all-electric buildings. Many “green” companies are seeing the benefits of putting miniature turbines on their roofs to supplement their power needs. Over 80 countries around the world supply at least part of their electric needs with wind energy, Denmark leading the way with 40% of its power supply coming from wind.